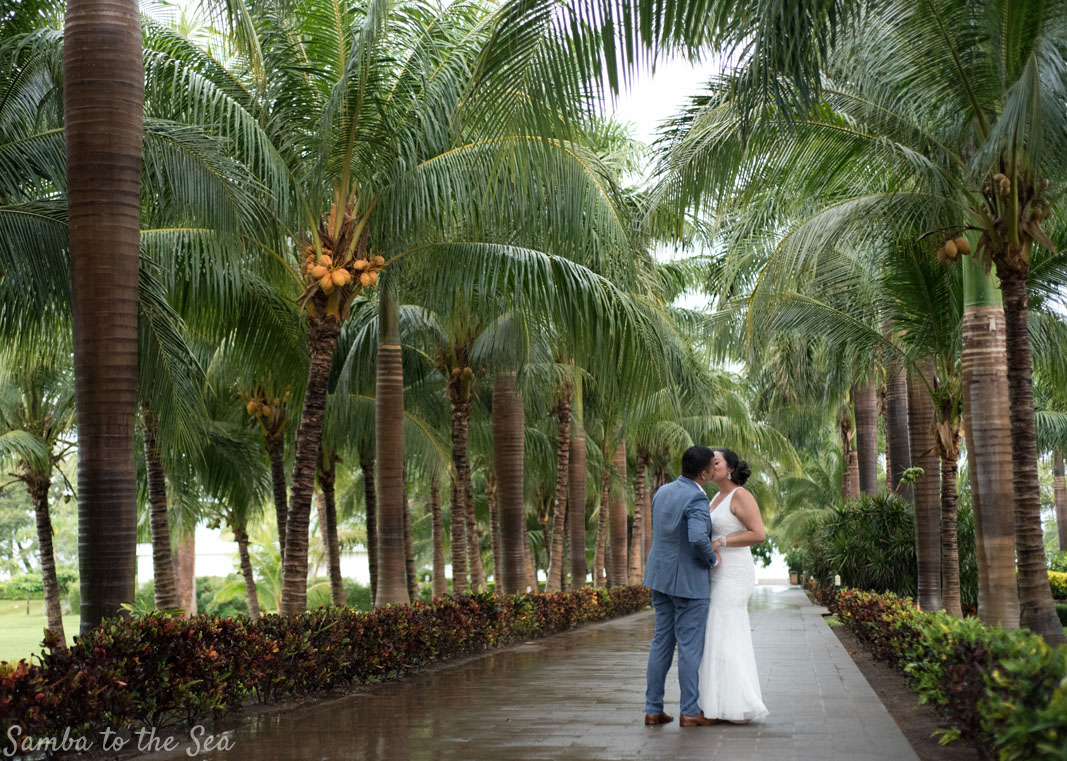 Twelve years ago Cecy travelled from Chicago to Wisconsin to visit her cousin Edgar, who was attending an all boys seminary high school. Then only a freshman in high school, little did Cecy know that she was about to meet the love of her life. During her visit, her cousin introduced her to his friend, also named Edgar. A year after their introduction, Edgar asked Cecy to be his girlfriend and this beautiful couple has been together ever since. Finally, after almost eleven years of dating, Edgar asked Cecy to spend forever with him this past December. Cecy and Edgar had always dreamed of vacationing in Costa Rica, so a destination wedding in Guanacaste Costa Rica was a perfect place to exchange their vows and celebrate their past, present, and future. 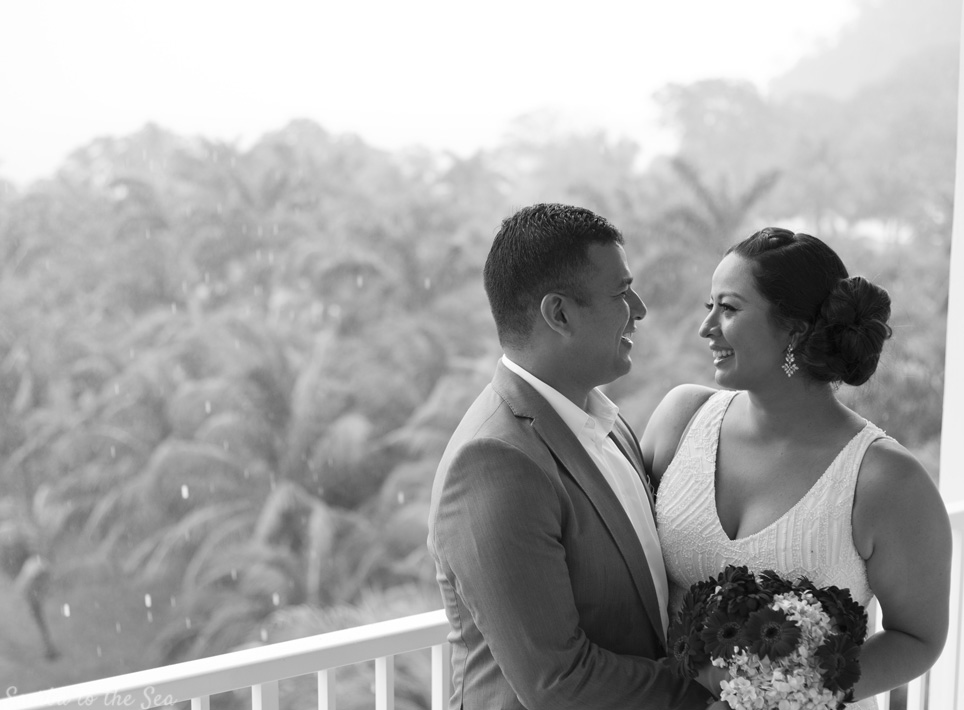 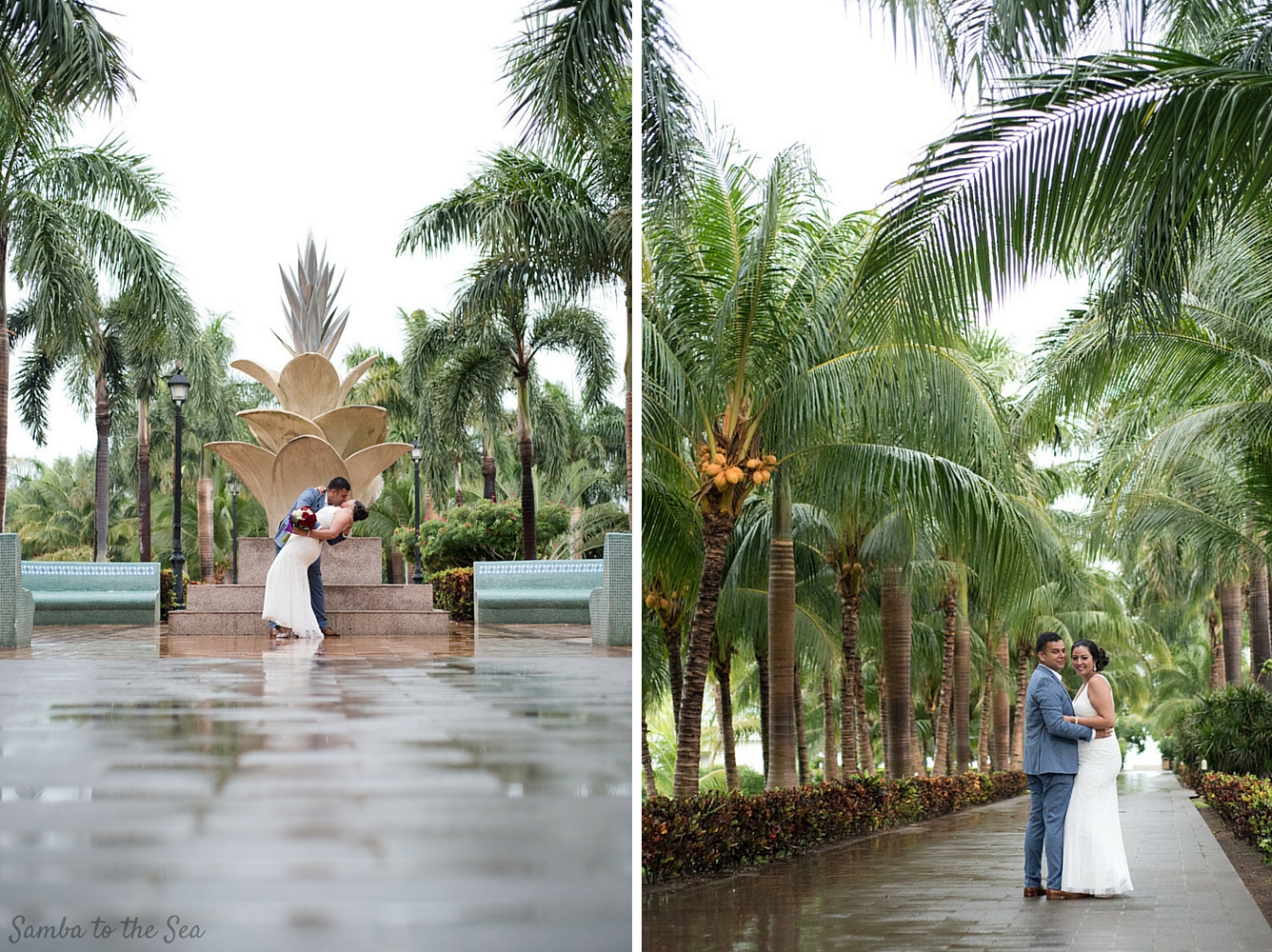 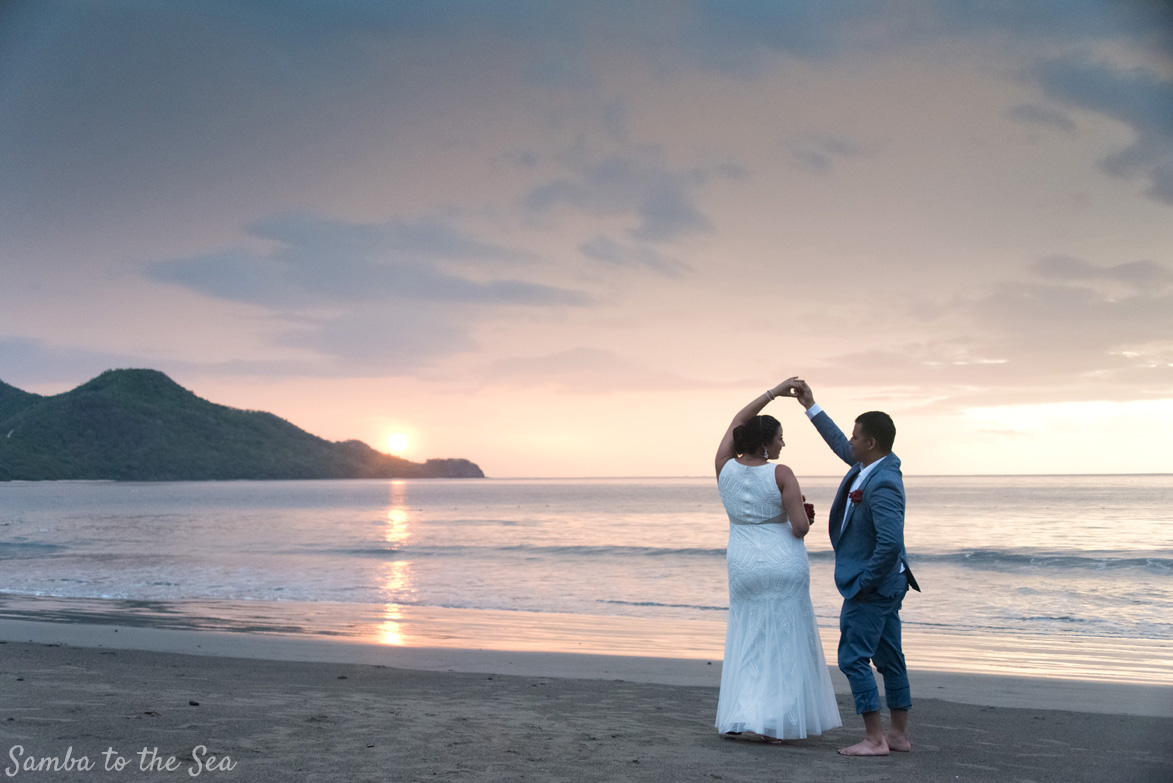 When I asked the couple how Edgar proposed, they both laughed and said, “Well, that is a long story!” Interesting enough, even though Cecy and Edgar had been dating for years, Edgar tried proposing to Cecy two other times before he finally was even able to get down on one knee. As Edgar commented, “Last December Cecy was super busy helping to plan two weddings for her loved ones. I had to get on her calendar to see her!” Edgar first planned a romantic weekend in Grand Rapids, Michigan to ask the question. After that trip was cancelled, he then made reservations for a nice dinner and a carriage ride in Chicago, but Cecy was just so busy that he had to cancel this plan as well! Finally, Edgar asked Cecy to take a stroll through Lincoln Park. It was a casual afternoon, but it finally was the perfect moment to  to ask Cecy the question he had been dying to ask her. Edgar was so excited to ask Cecy, “I barely had dropped to one knee before the words came out to ask Cecy.” Cecy was so excited that she barely gave Edgar enough time to finish his question, “Will you marry me?” 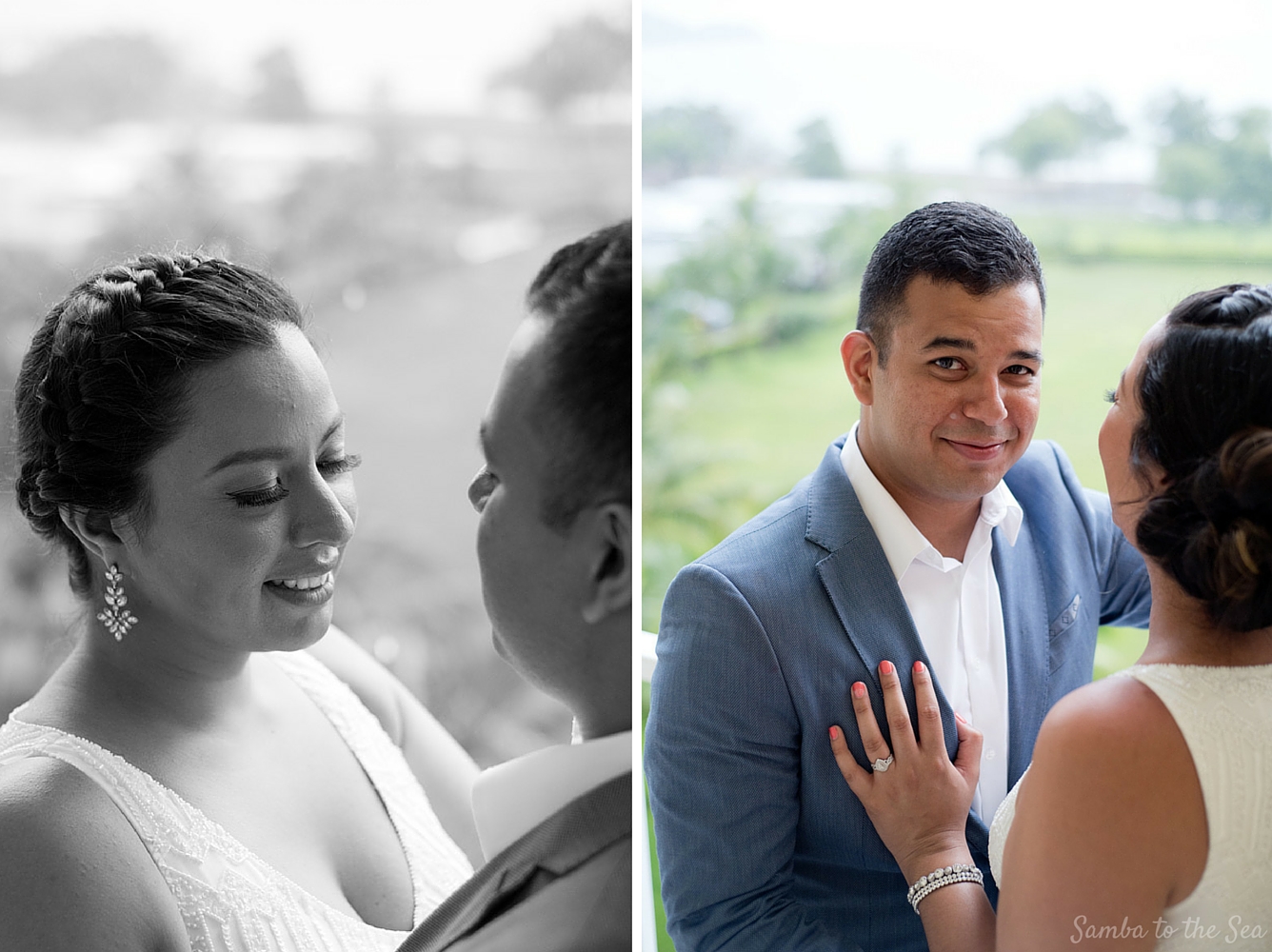 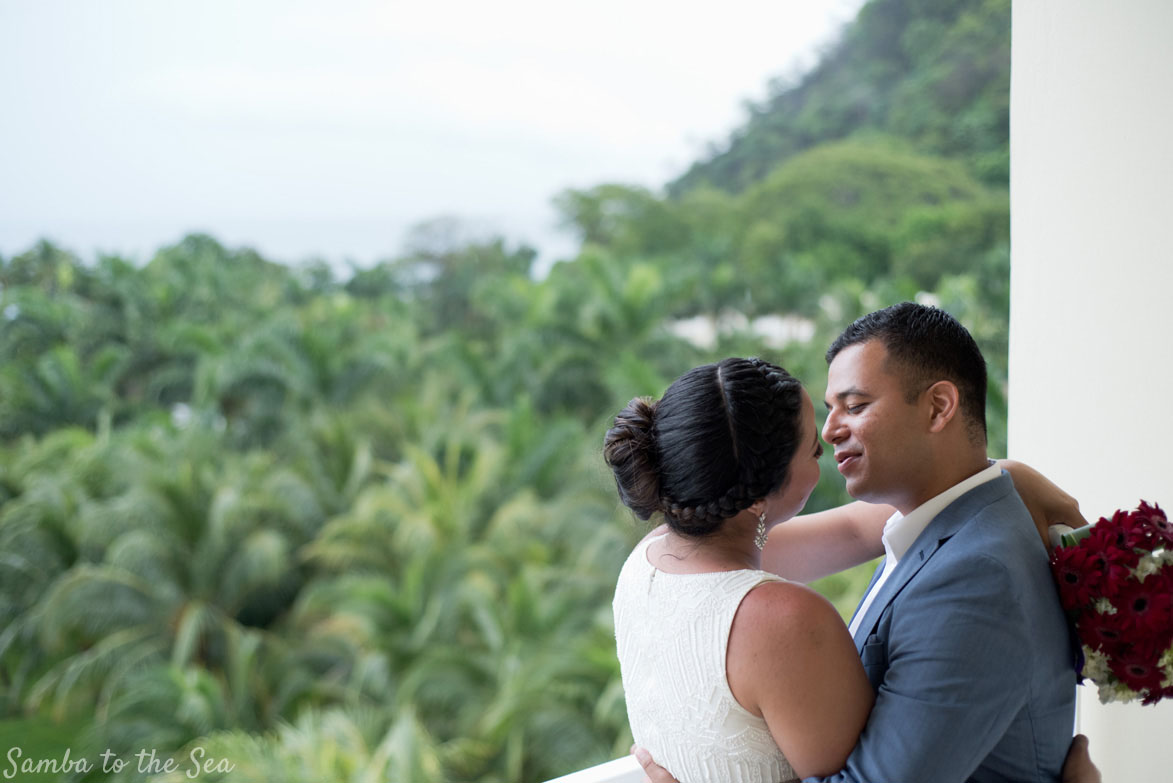 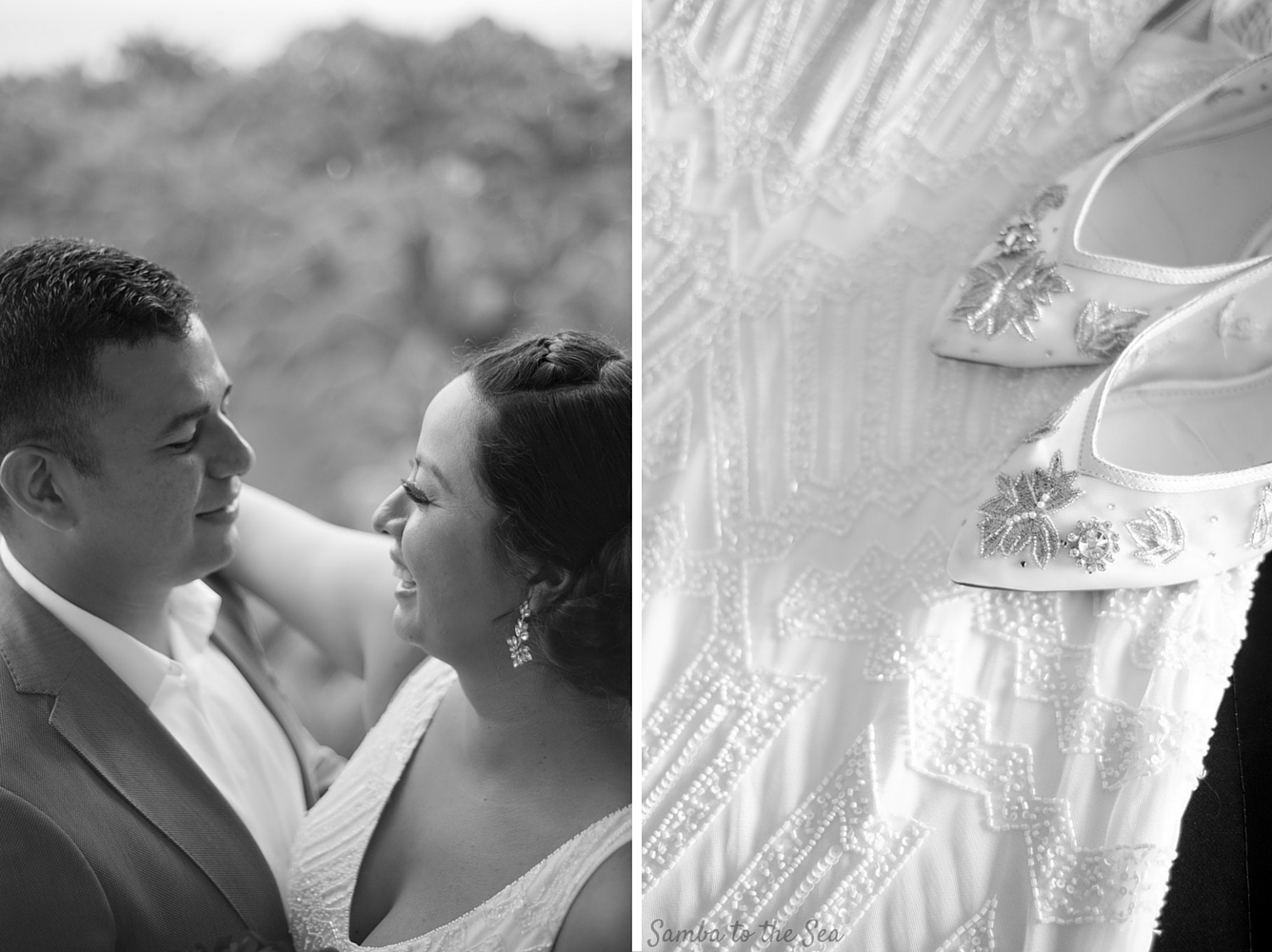 Six months after Edgar asked Cecy to spend the rest of her life with him, the couple said their “glorious” I-Dos in front of their closest family and friends during their destination wedding in Guanacaste, Costa Rica. Their was so much joy, love, and happiness surrounding Edgar and Cecy that not even an afternoon down-pouring thunderstorm could damper their day. In fact, Edgar, Cecy, and their family and friends started celebrating in Edgar and Cecy’s honeymoon suite while Cecy’s bridesmaids were putting on their finishing touches. Cecy’s father, the life of the party, kicked off the celebrations with a round of tequila shots. Just as the afternoon thunderstorm arrived, Cecy’s mom helped Cecy put on her wedding dress, while the men enjoyed cigars on the balcony. 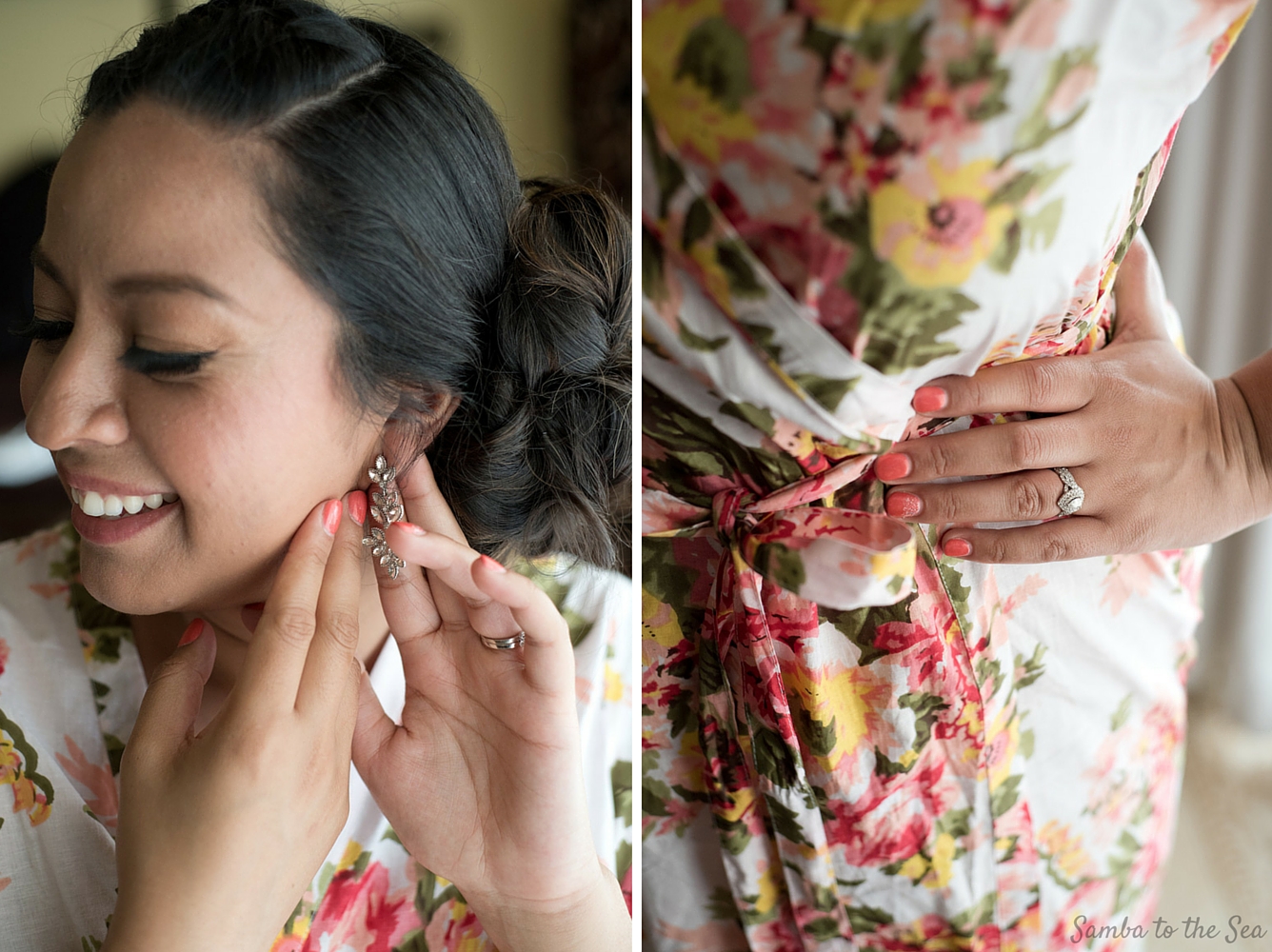 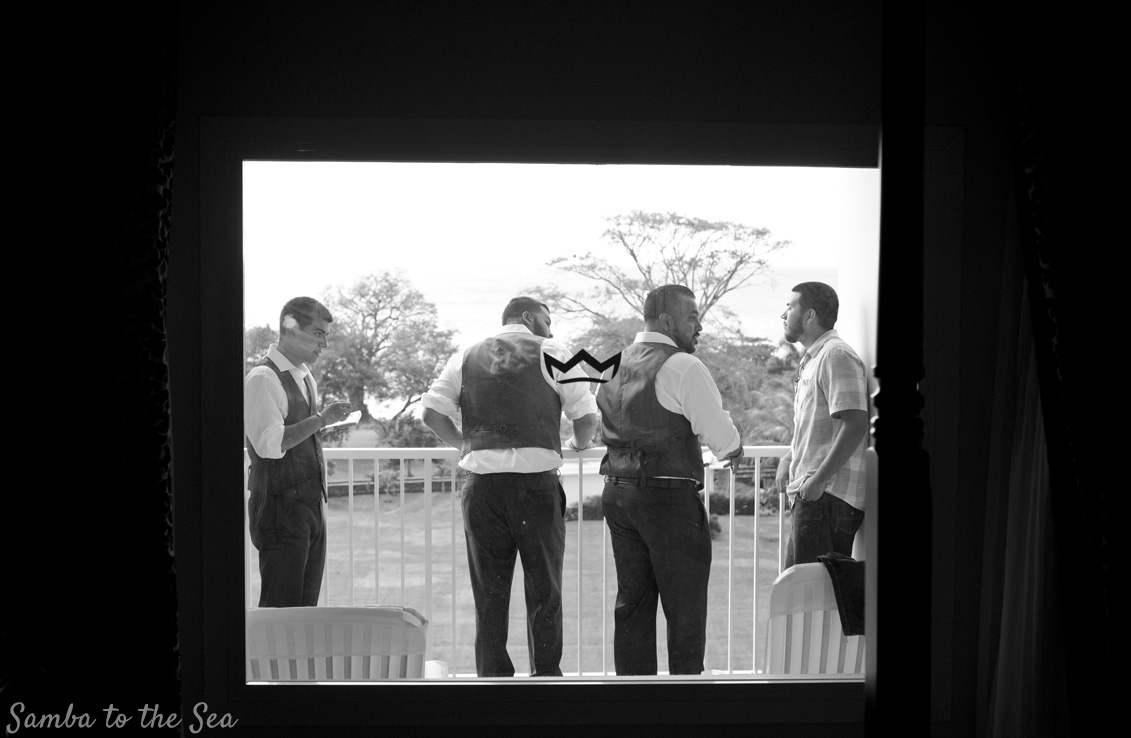 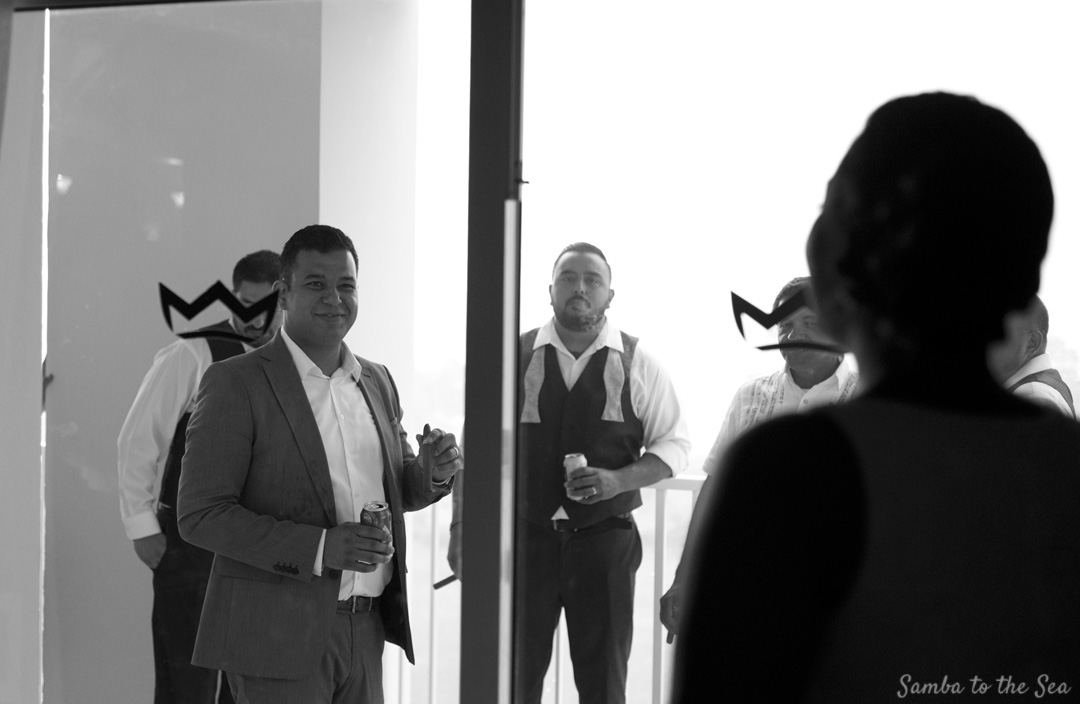 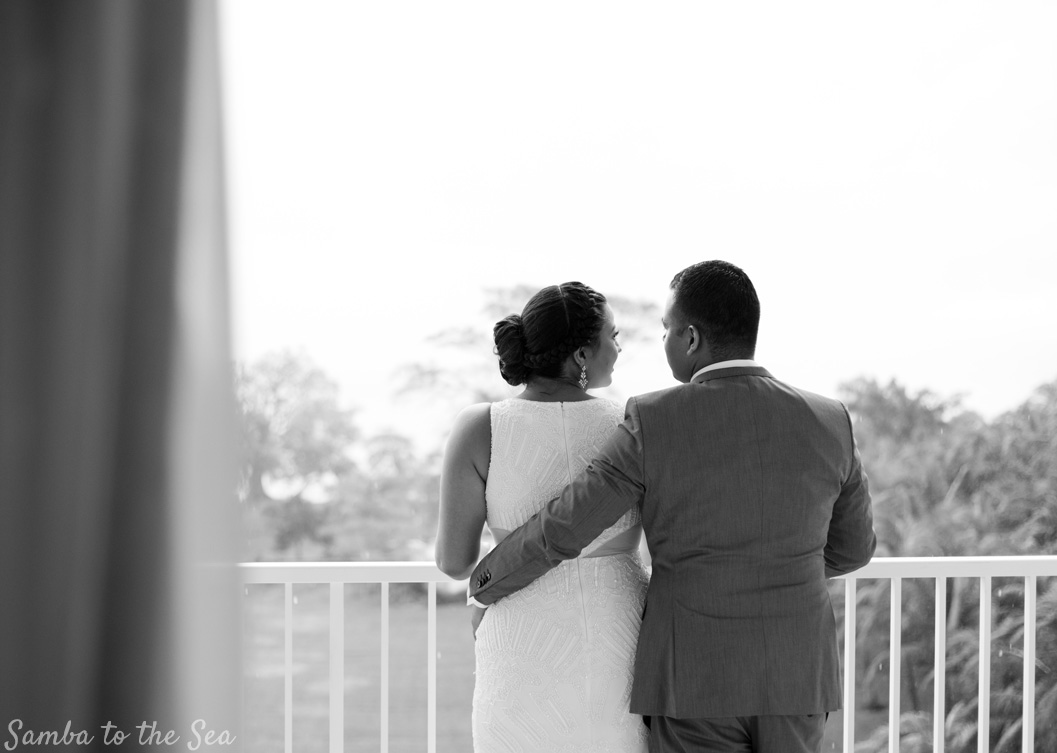 Thankfully, the thunderstorm quickly passed and gave Cecy, Edgar, and I the opportunity to capture some beautiful photos before and after their wedding ceremony. Because the rain corralled the hotel guests of the RIU Guanacaste inside, we were fortunate to enjoy the grounds of the hotel to ourselves. To top it all off, Cecy and Edgar enjoyed a magical sunset practically all to themselves on the beach. The burning, orange sun peeked through the rain haze as the clouds lit up with a gorgeous sunset on Playa Matapalo. 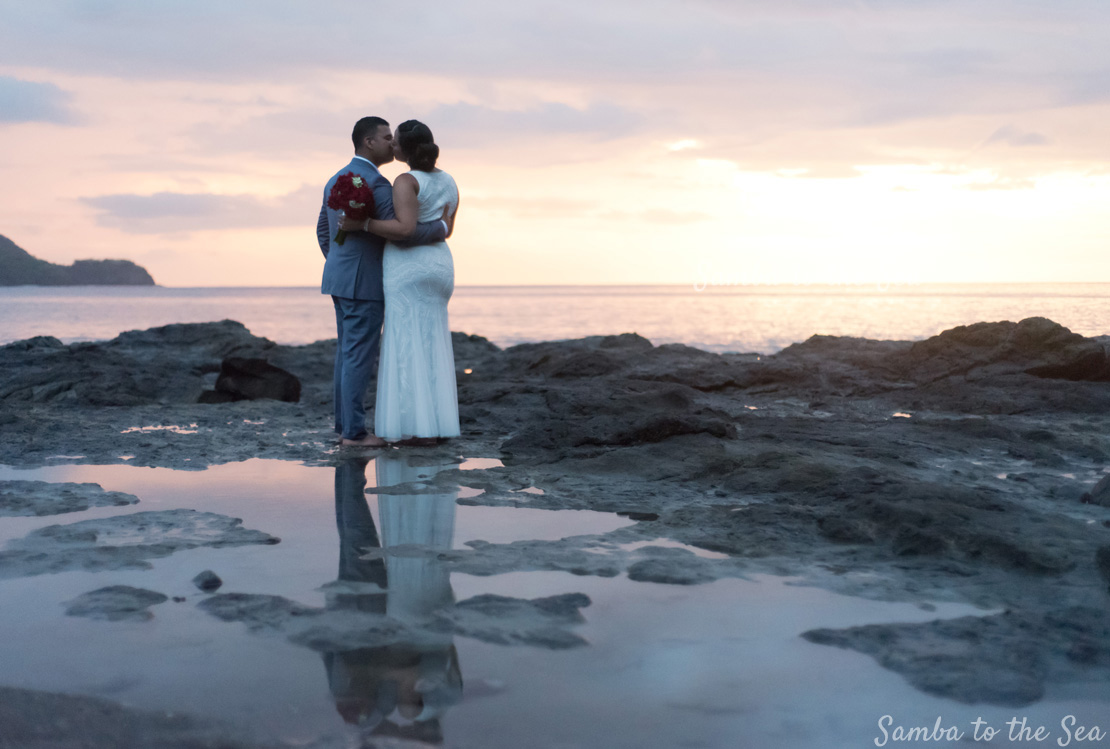 After the jawdropper sunset, Edgar and Cecy were ready to celebrate with their family and friends. And let me tell you, not only was this crew a blast to be around, but also they know how to party AND dance. Cecy’s little brother Urie busted out some impressive dance moves and her parents salsa-d the night away.  There were countless chile guaro and tequila shots passed around; several of those rounds were taken with the waiters! To say the least, this group kept me laughing the whole night! 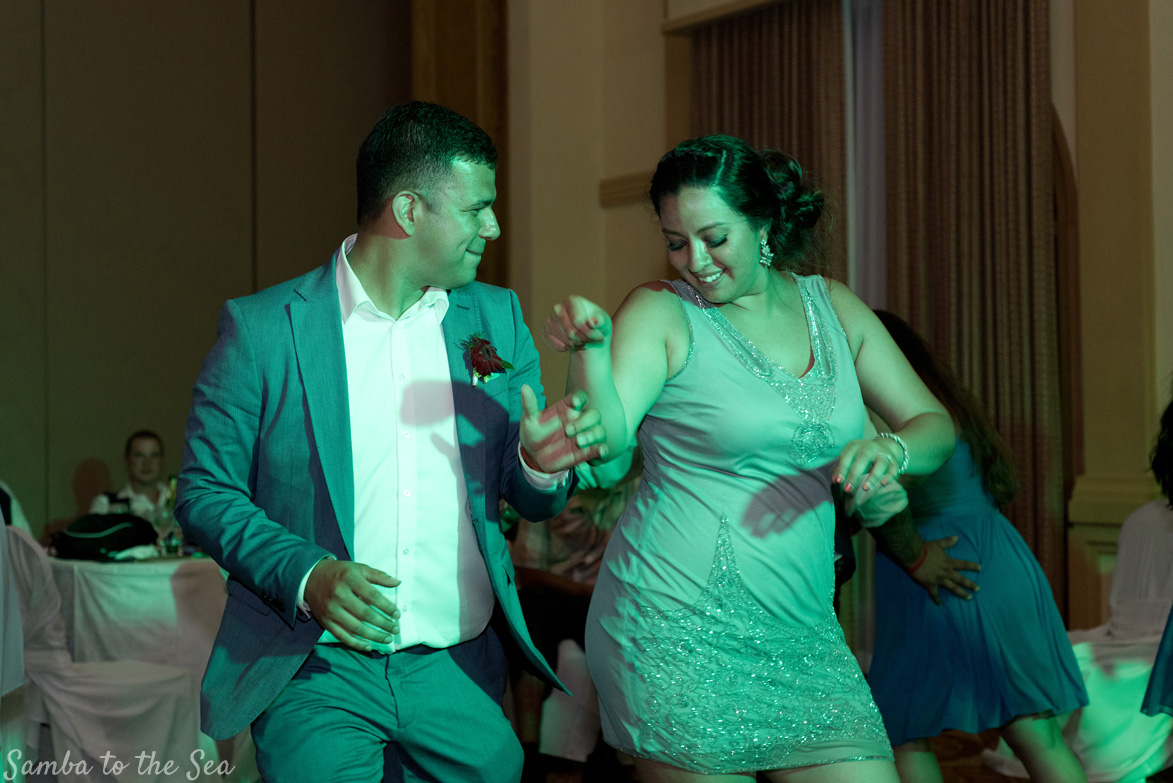 Cecy and Edgar, I wish you two a lifetime of “glorious” love!

P.S. Love these photos? Check out my Wedding Photography portfolio! 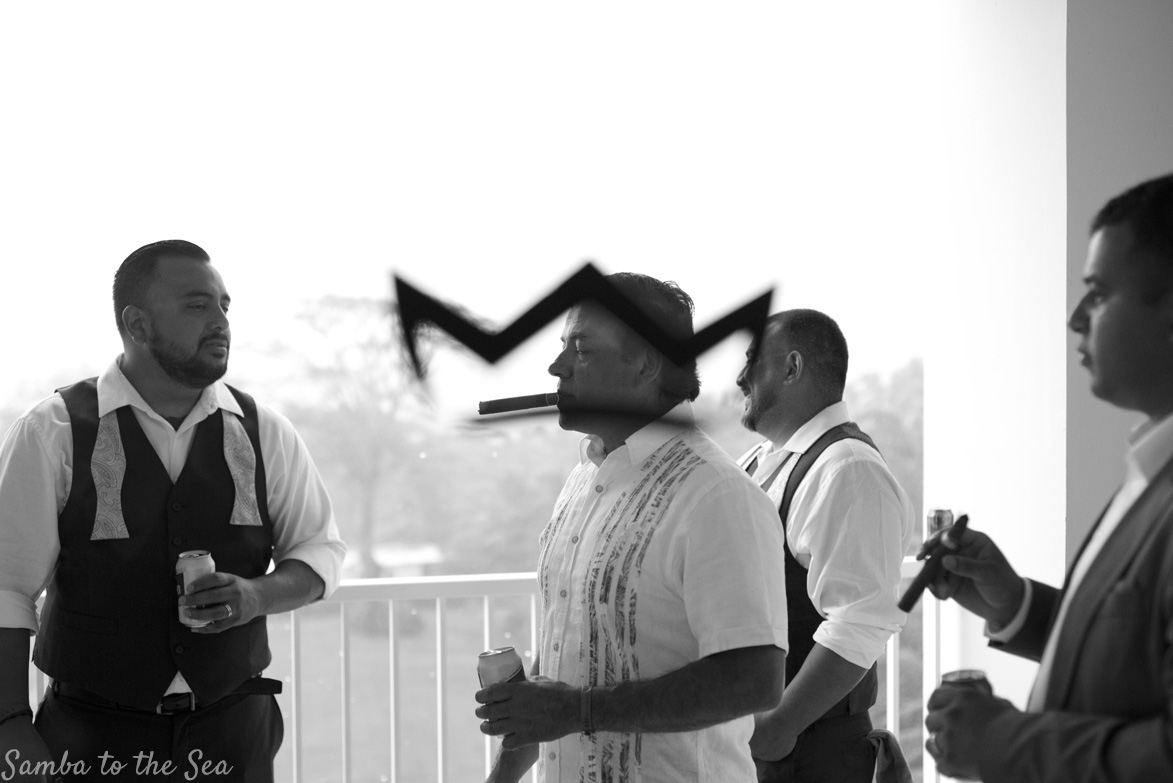 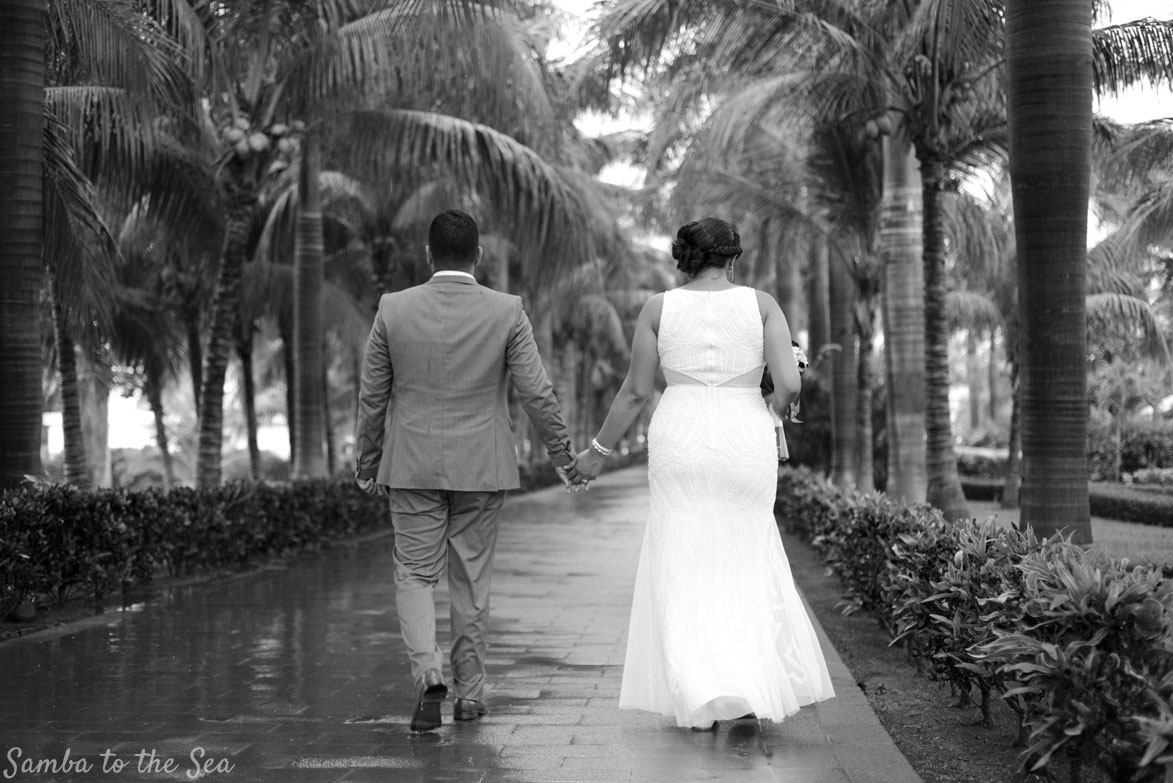