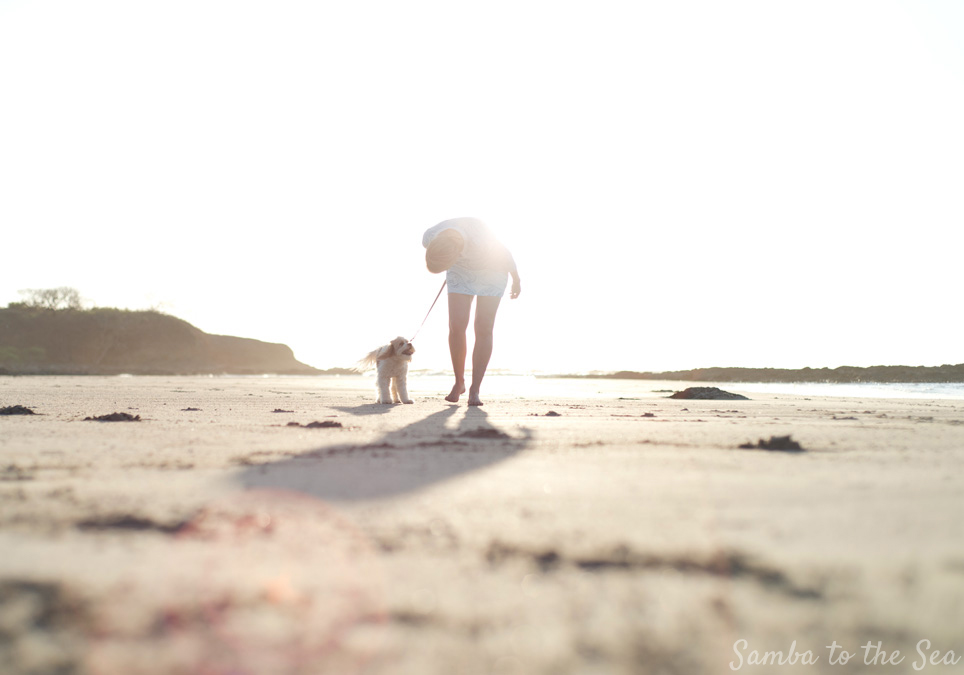 I was super excited for rainy season to start here in Tamarindo, Costa Rica at the beginning of May. BUT I wasn’t too stoked when an afternoon rain storm just so happened to start its downpour twenty minutes before my scheduled lifestyle shoot on the beach in Tamarindo with Theresa and her dog Waffles, an adorable Cavapoo (King Charles Spaniel and Poodle mix)! As predicted, the rain only lasted about twenty minutes, but long enough that Theresa and I had already decided to postpone the shoot. Stupid rain! 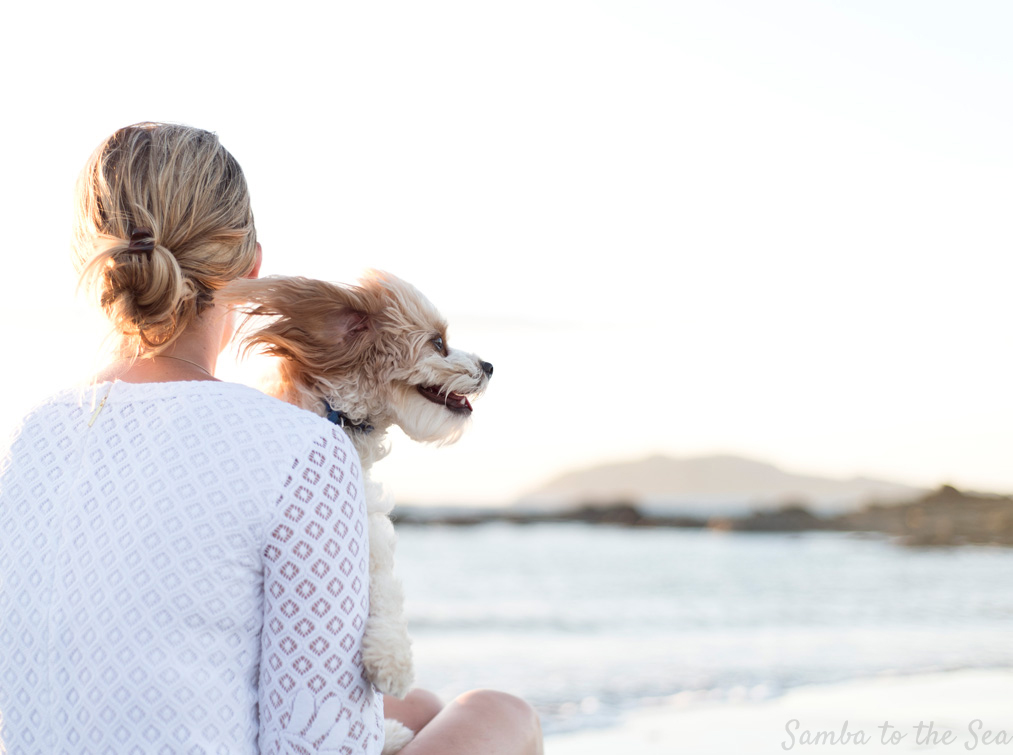 I felt so bad that Theresa spent time getting her hair styled that afternoon AND also groomed Waffles! So as soon as the rain stopped, I called Theresa and asked her if she would like to at least get in a couple of shots before it got dark outside since they were already dressed and ready to go. Despite the gray skies from the passing rainstorm, Theresa, Waffles, and I took advantage of an empty Tamarindo Beach. My little Chihuahua even had a blast “guarding” my camera gear (insert hint of sarcasm). 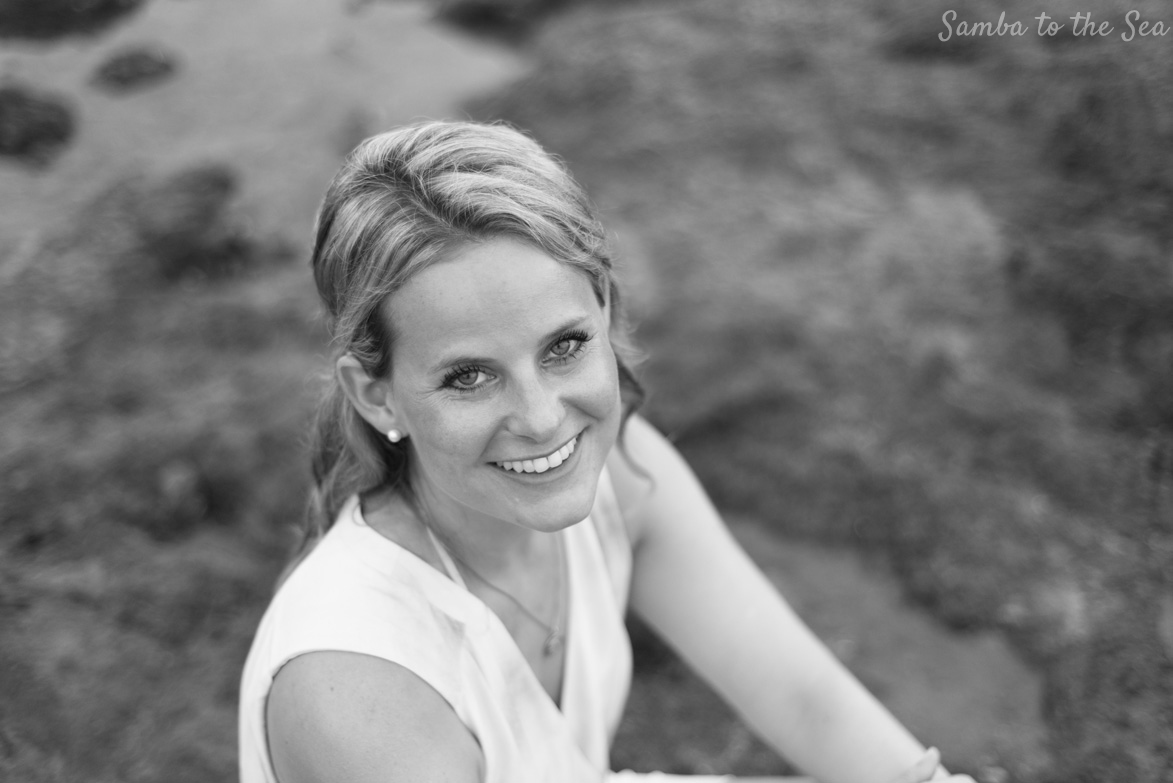 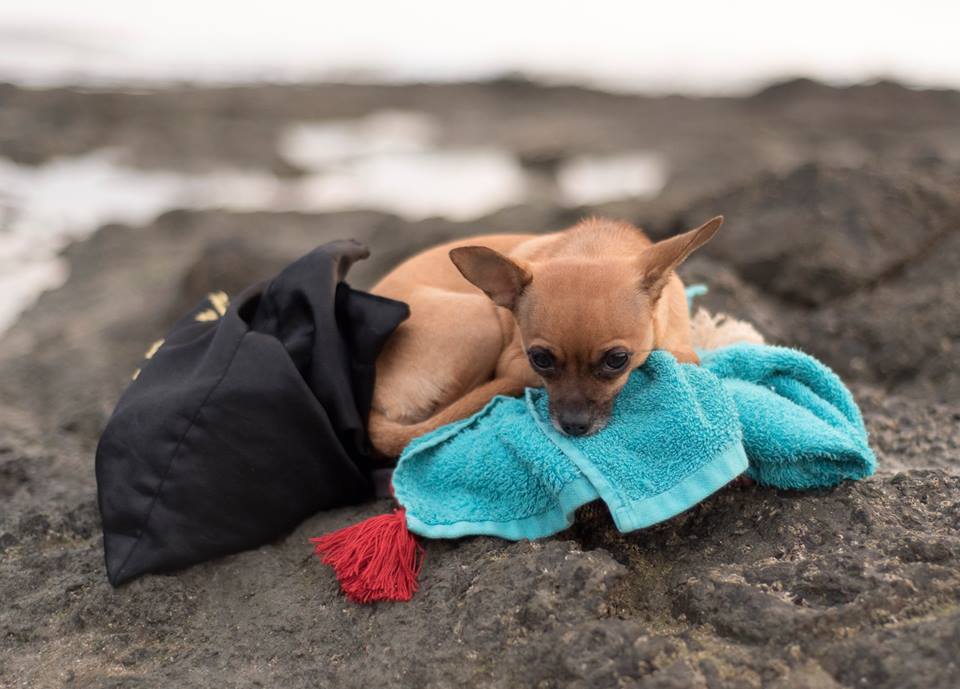 Fast forward to our scheduled rain delay date a couple days later, and just our luck the gray skies reappeared. We decided to postpone again as luckily Theresa and Waffles were in town for another couple of weeks as these two lovely ladies were spending the month in Tamarindo studying Spanish at one of the language schools, WAYRA. And let me tell you, we certainly were hoping that the third time was going to be a charm! 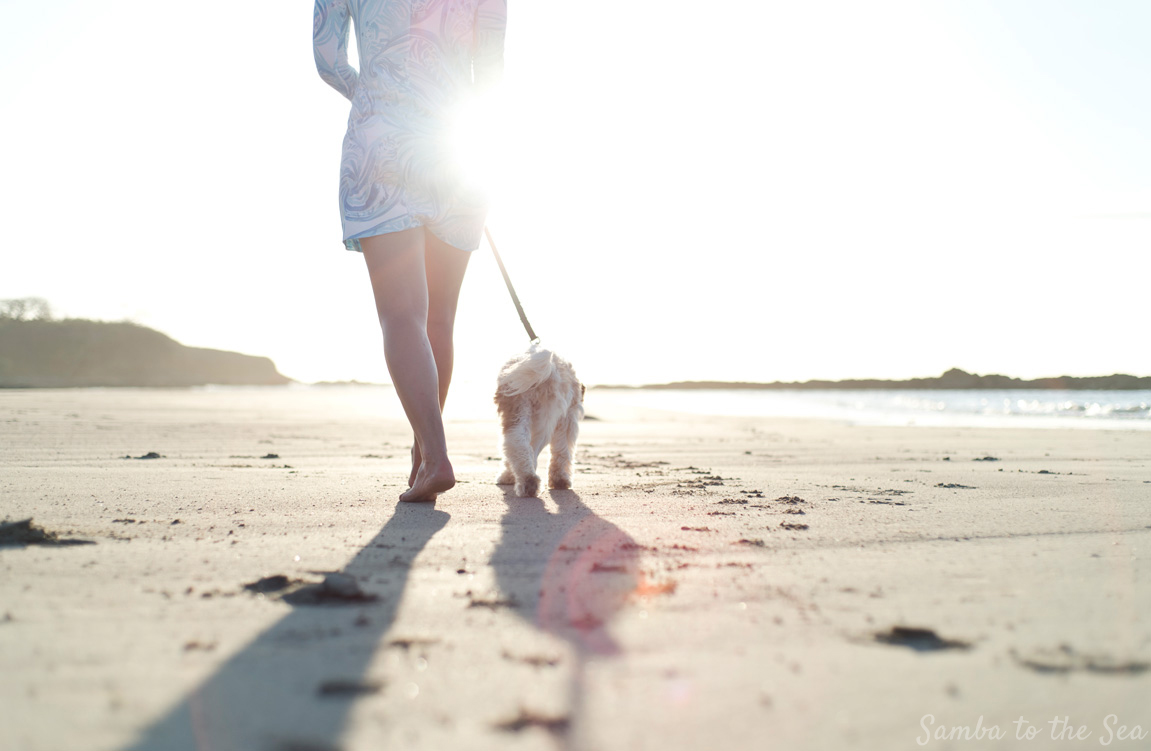 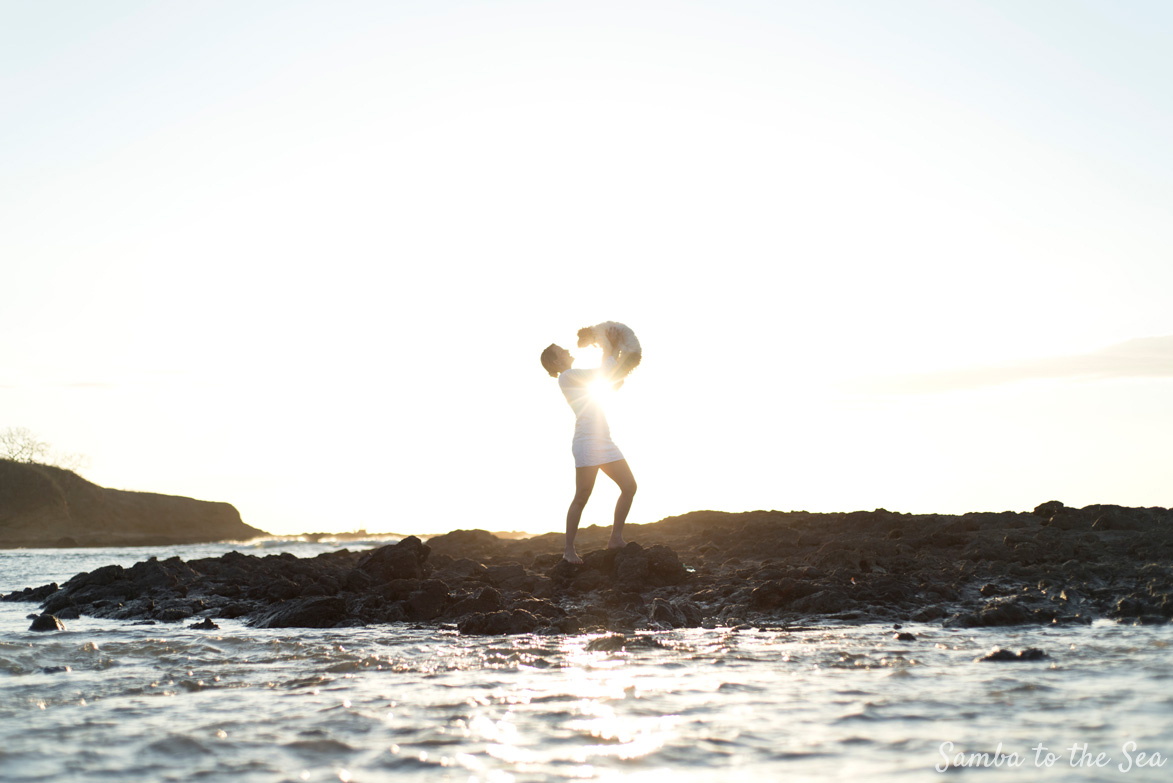 FINALLY, on a golden afternoon in Tamarindo, Theresa, Waffles, Gidget, and I had a blast photographing and playing on the beach in Tamarindo. Given that Theresa recently left her job at JPMorgan in New York City (can I get a heck yeah!) to pursue a new dog fashion business inspired by her Cavapoo Waffles, these ladies were in need of some beautiful photos for their marketing! Living in San Francisco, Theresa said she was uninspired by the lack of fashionable diversity for dog-wear. Why did it seem that the only option for a female dog accessory was pink and pinker?! Certainly there can be better options that better matches a dog owner’s personal style! I can certainly attest to this as last December I spent hours trying to find a winter jacket that was not so girly for my female Chihuahua. Her business will be catering to stylish women who love their dogs with a passion – how amazing is that?! And let me tell you, Theresa’s outfit choices for the shoot fit her personality perfectly. Theresa wore two beautiful Lilly Pulitzer dresses thats flattered Theresa’s slim and athletic frame. Oh how I love Lilly! And that beautiful romper by Yumi Kim and a blue turquoise dress from Parker NY – stunning! To top it all off, these ladies from San Francisco had to support their roots and donned some San Francisco Giants gear! 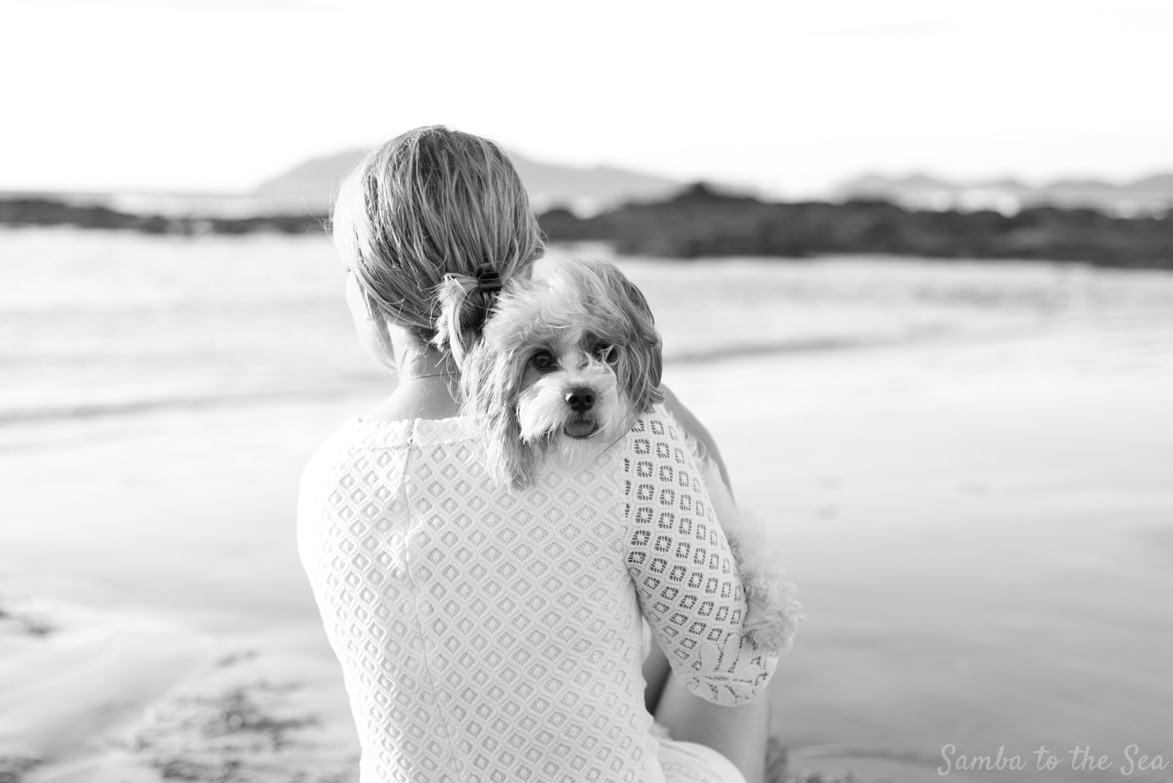 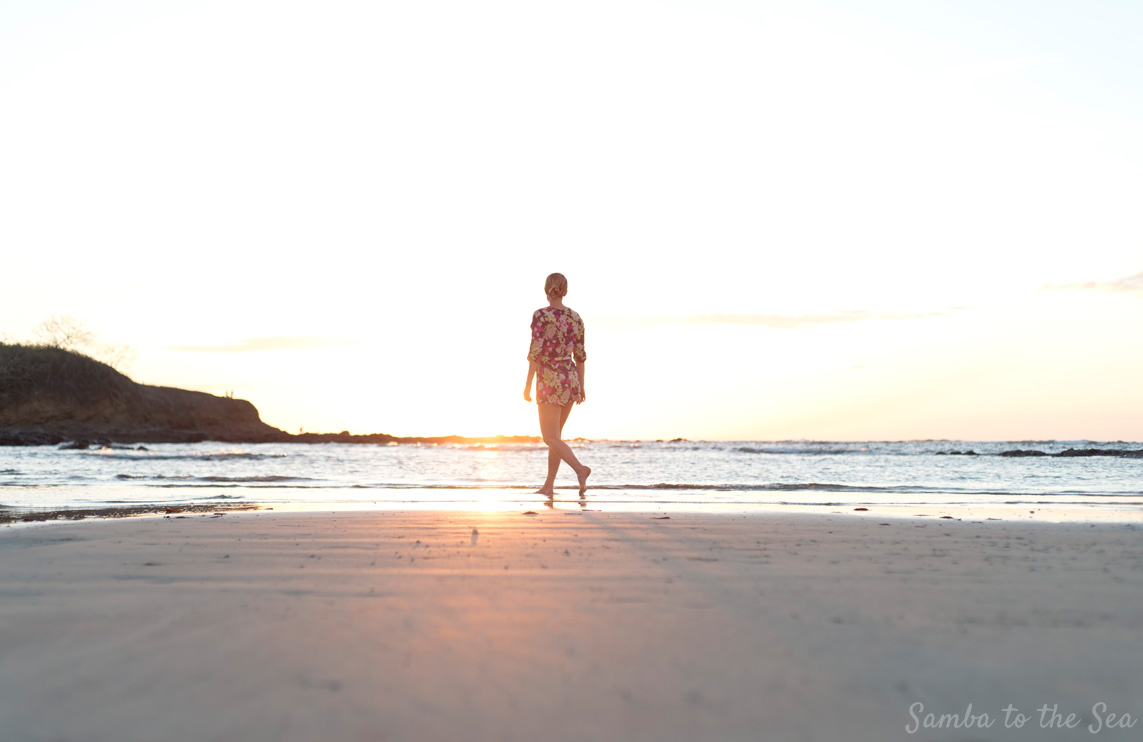 The best part of the shoot may have been the chocolate peanut butter milkshakes from Surf Shack to toast to a fantastic AND sunny photo shoot! A special thank you goes to Theresa for the delicious treat! 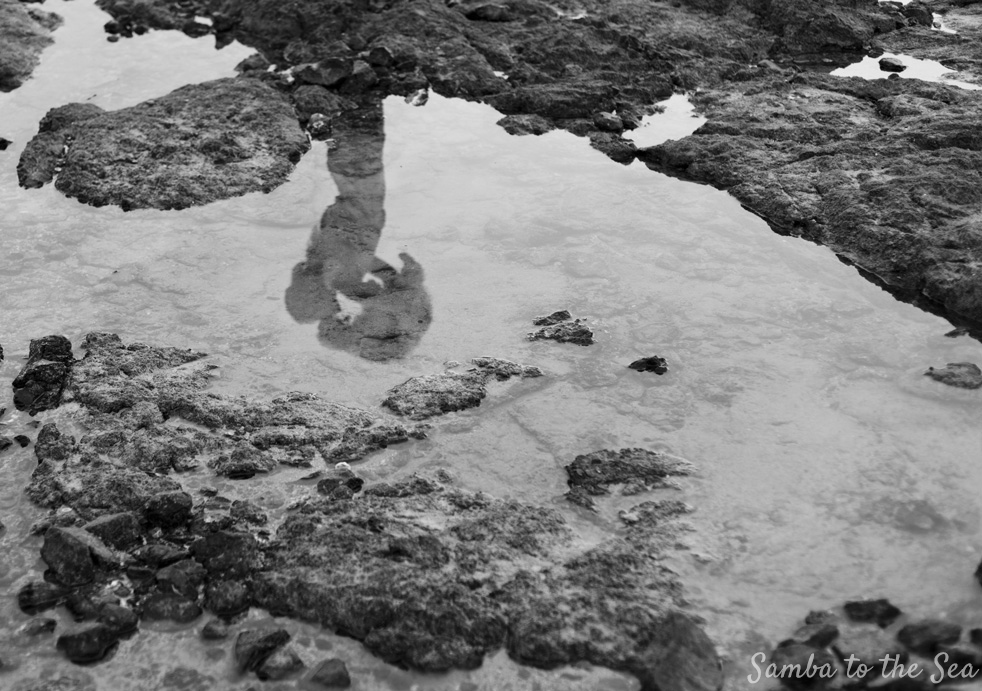 P.S. Theresa, thank you so very much for your service in the US Army! And a very special congratulations to Waffles for receiving her K9 Spanish certificate!

P.P.S. Like this beautiful location or would love to get photos with you and your pup? Check out more of my work in Tamarindo and my Dog Photography!